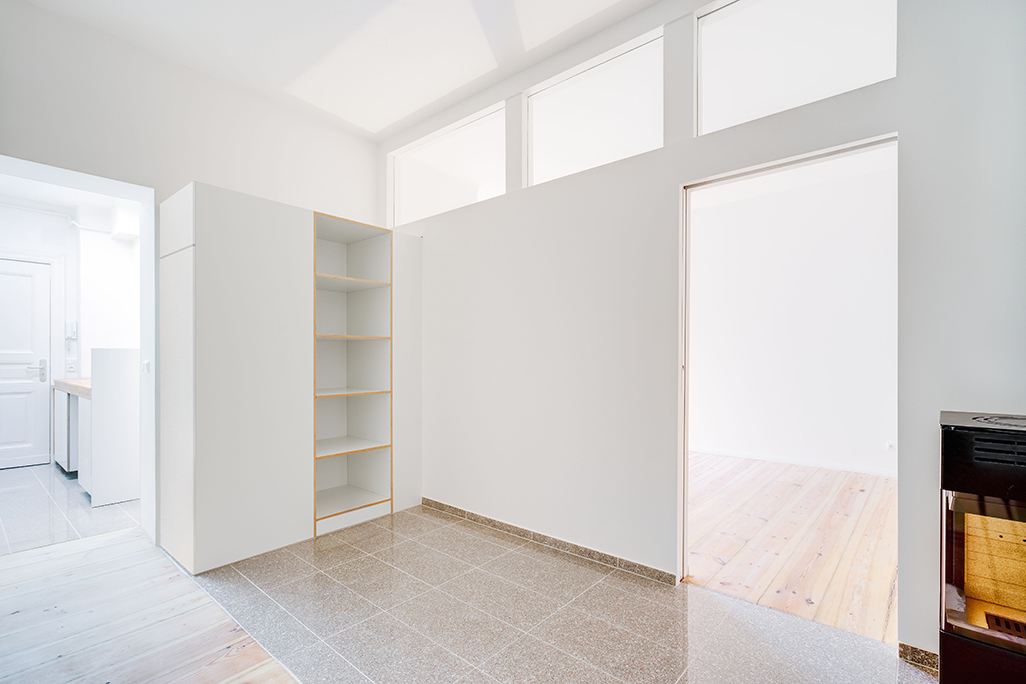 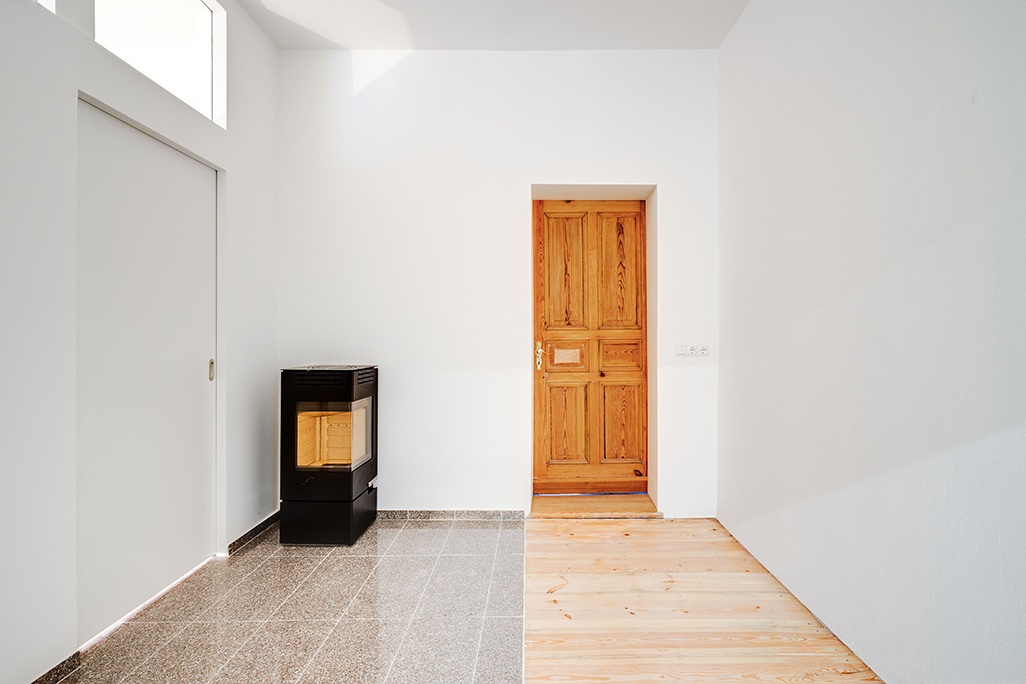 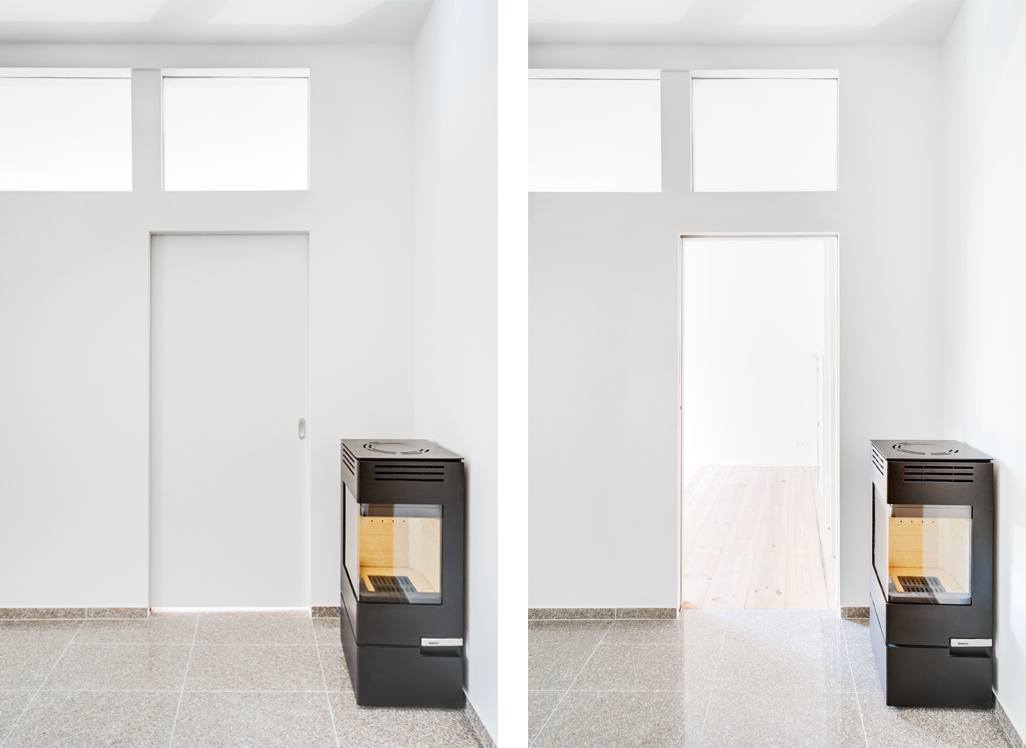 In this project, a loft apartment within a traditional Berliner Altbau was remodeled.
The original distribution had two main rooms plus separate bathroom and kitchen. Previously suited to a couple, the 54 m2 space had to be transformed into an apartment for a young family of four.
The interior proportions were redistributed to provide separate sleeping areas for parents and children at opposing ends of the plan, with communal zones of family interaction in-between, all without compromising natural ventilation and daylight.
The entrance for the apartment is located in a threshold attic space and so the geometry of the original roof and the existing sanitary installations were predetermined factors in the compact design of the entrance, kitchen and bathroom zones. In this area, the roof line falls from almost 4 m down to 25 cm towards it's outer edge so that standing height is reduced towards the exterior wall.

One major requirement of the client was to upgrade the bathroom from its previous incarnation of shower room WC. The family specified a washer-dryer, a proper bathtub and a window for natural ventilation. We arranged the bathroom carefully around a central pivot point with a good central standing height position under the dormer window. By turning 360°, one can make use of all facilities.

The clients requested the service zone of the kitchen be reduced in scale for those functions attached to the service core in this area, so a decision was made to elongate a galley kitchen along the existing lineal axis of the apartment, leading from entrance hallway expanding into the dining area. This created a spine of family functions to which the private sleeping areas could connect or disconnect. 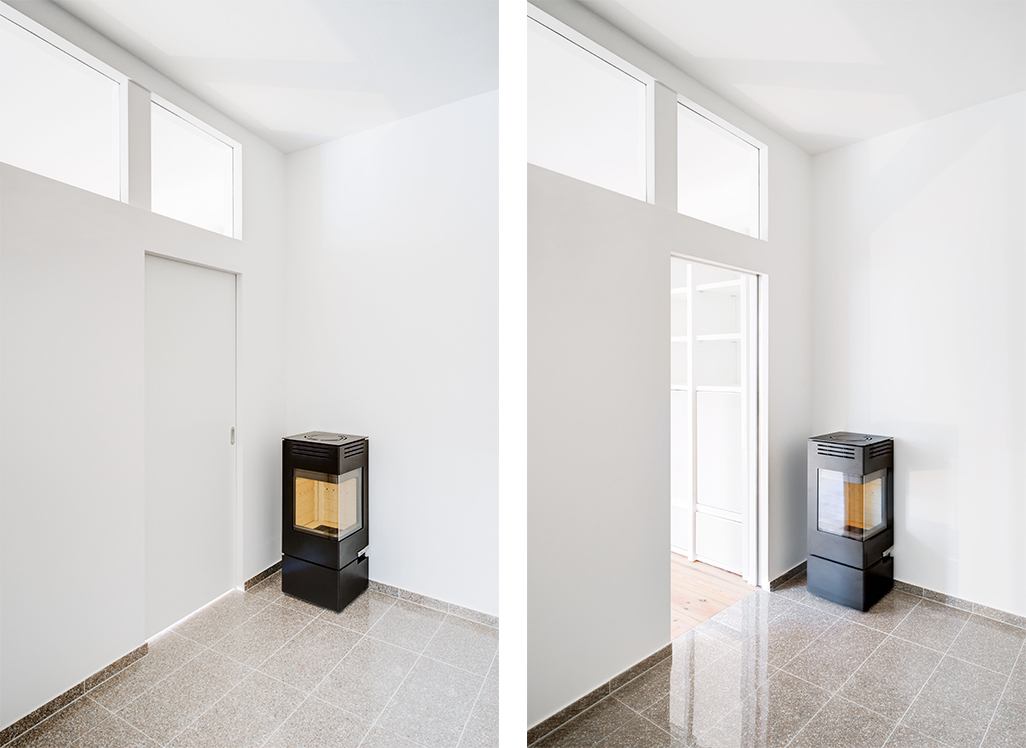 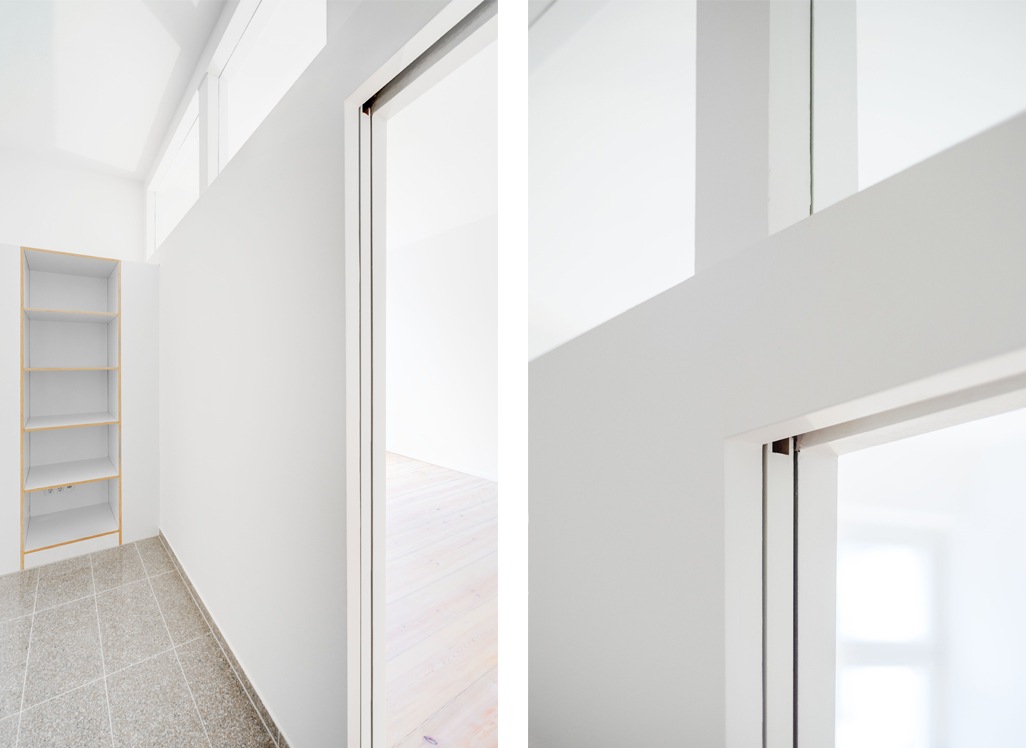 Permission was secured to build an overhead roof light. The original suspended attic ceiling was removed and the beams above exposed creating a light filled entrance area. The original structural beams were clad for fire safety with subtle integrated LED strip lights on their underside.
By reducing the larger of the two rooms to a good sized private bedroom for the parents, with access to the largest but north facing window in the apartment, we were able to create a private adult retreat and repurpose the left-over space of the larger room for other family activities. The former corridor of the original floor plan was widened to create a new family dining room which connects to the linear kitchen and occupies the heart of the new plan. This new internal room receives morning light from the new roof and from the two apartment windows.
In order to facilitate the family’s needs within the constraints of the given space, a “broken plan” approach was used, whereby the spatial sequences overlap from zone to zone depending on usage and time of the day.

In doing so, circulation space is greatly reduced and each space becomes more flexible, encouraging interaction and parental supervision. A specific wish of the clients was to install a fireplace in the dining area to create a cozy evening atmosphere.
In order to make use of the tall Altbau floor to ceiling height, the children's bedroom was conceived as a landscape of vertically ascending zones within the same room. A children's play area and lounge, occupying more than half of the room, is situated close to the family centered dining area at the same level. A small stairway rises to a 90 cm height sleeping platform level, with much needed storage space beneath and a ladder leads from the platform to a floating 'bridge-like' or 'tree-house' inspired second sleeping area, spanning wall to wall high above the lounge area below.

The project succeeded in expanding the family’s living area, by connecting the various spaces of daily activities and removing the need for a corridor. 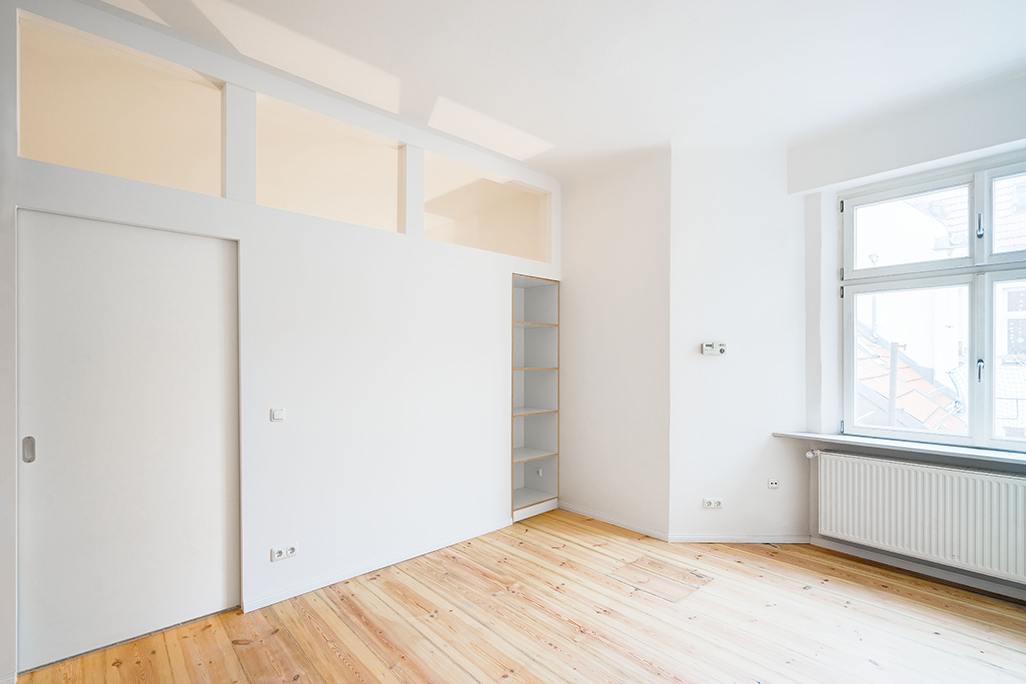 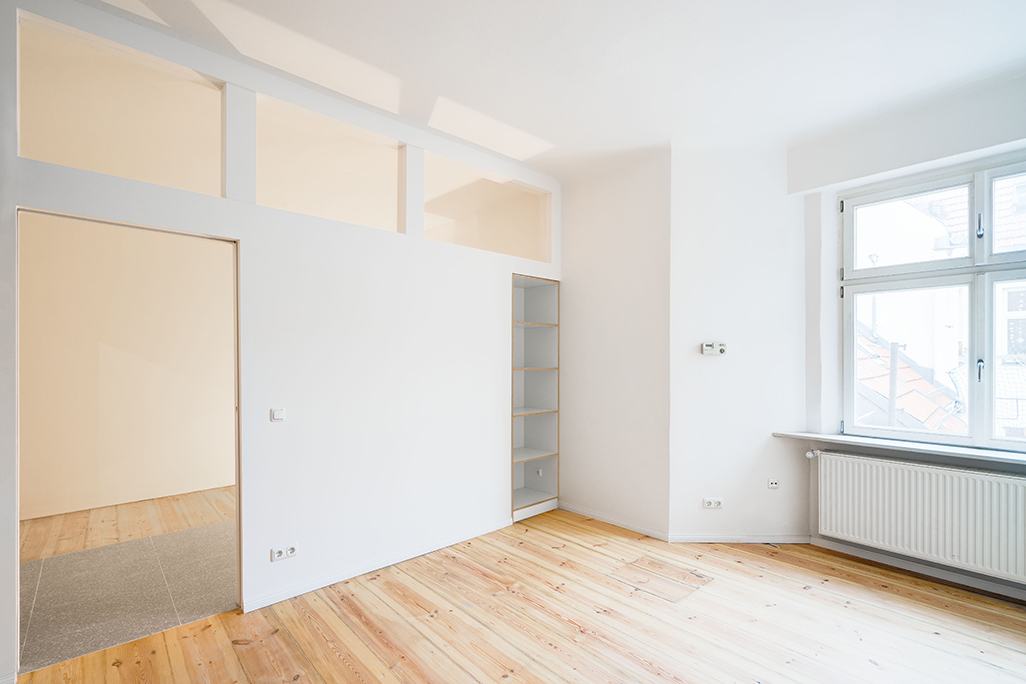 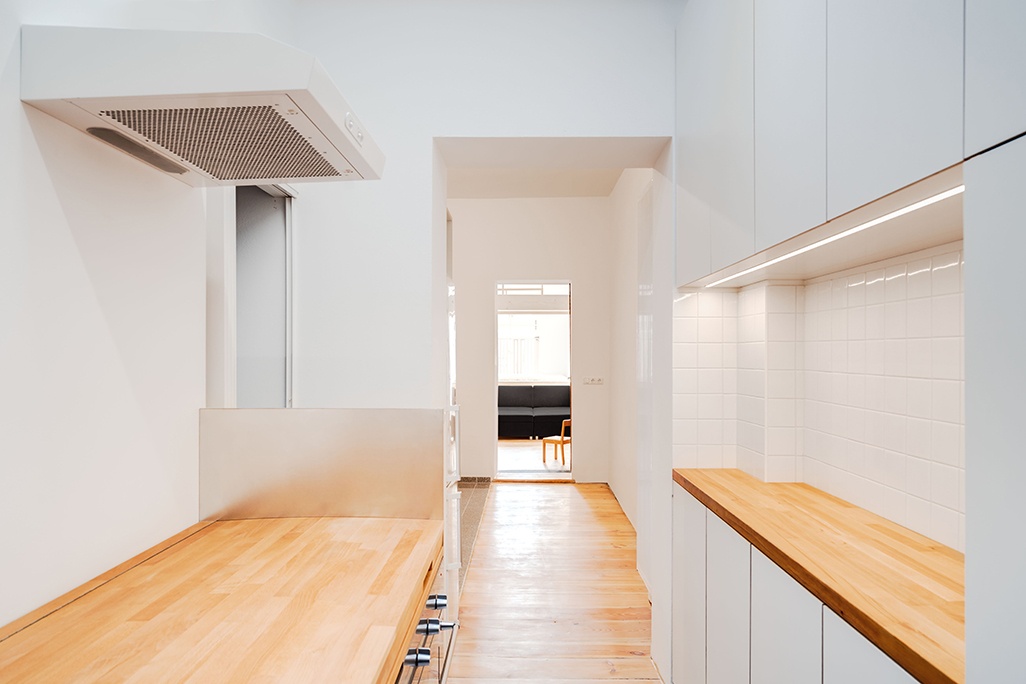 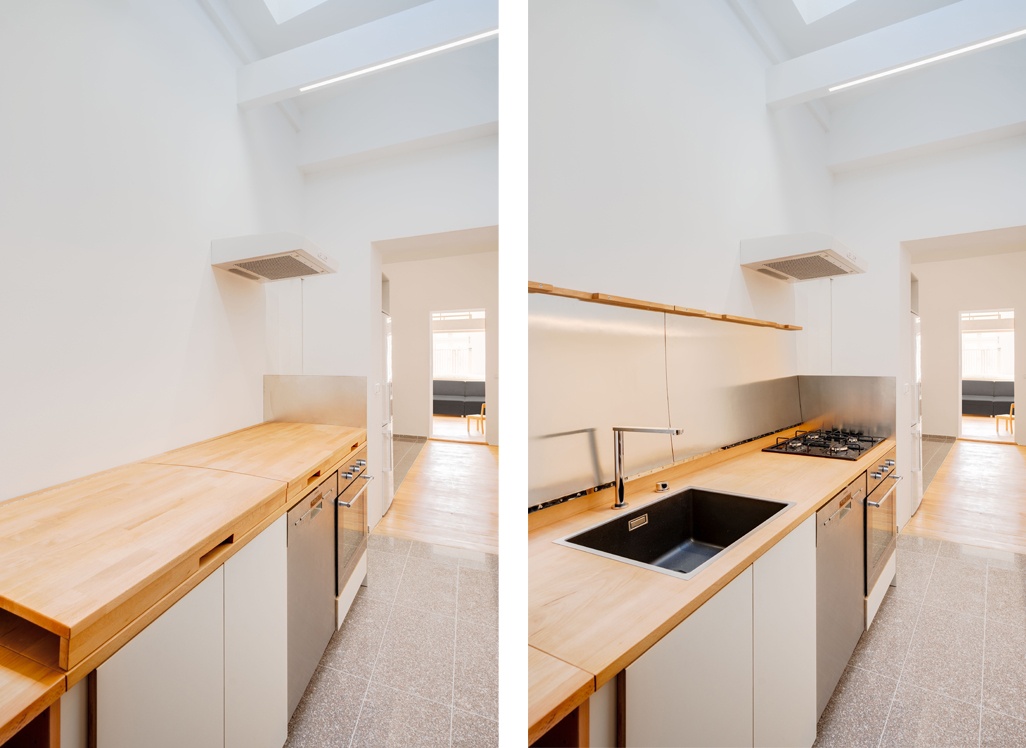 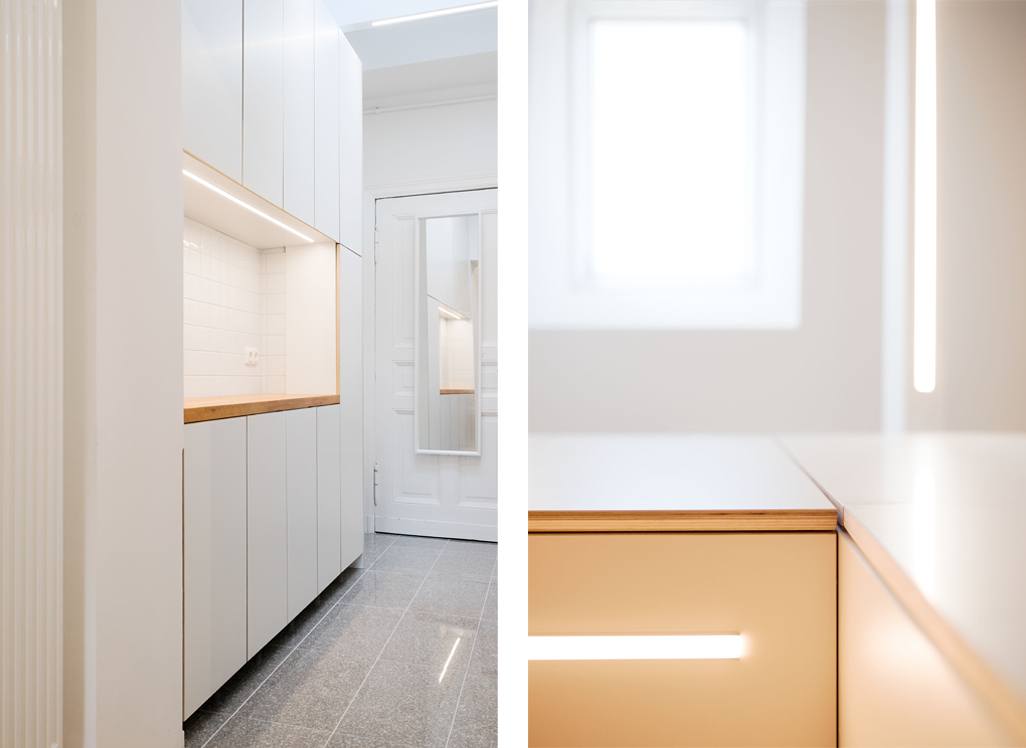 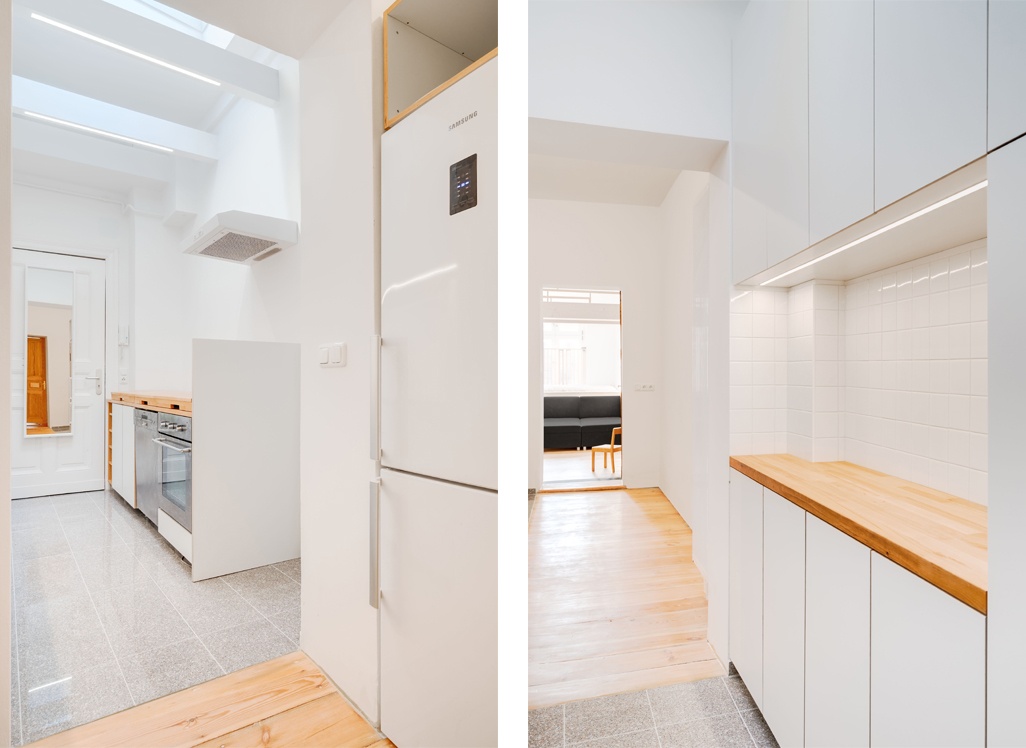 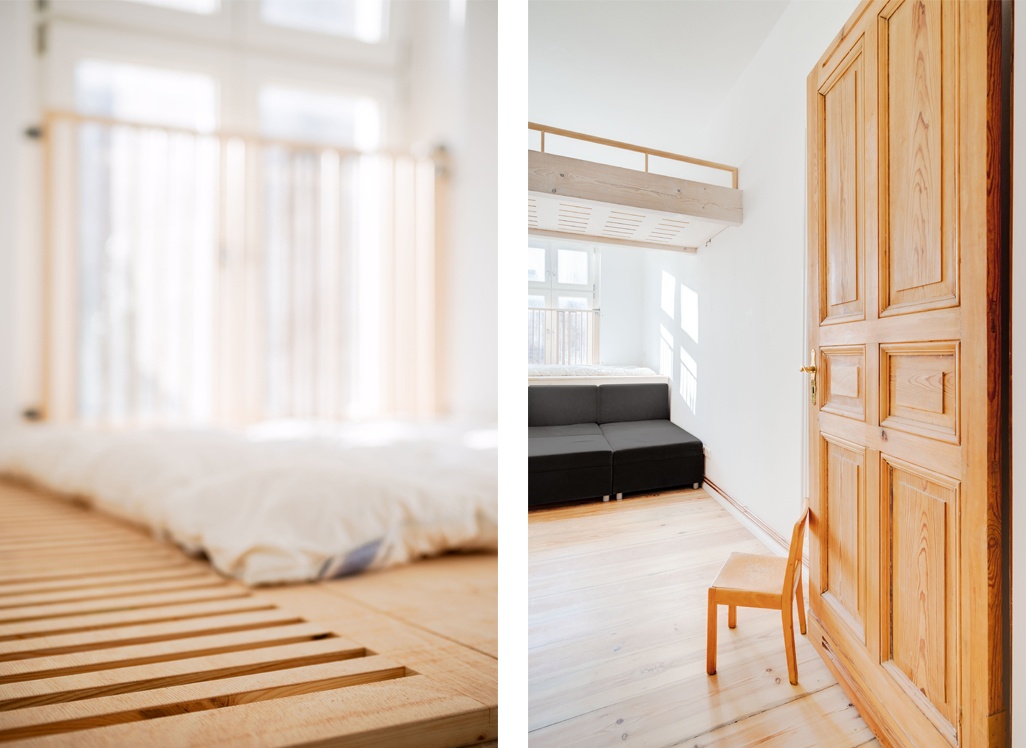 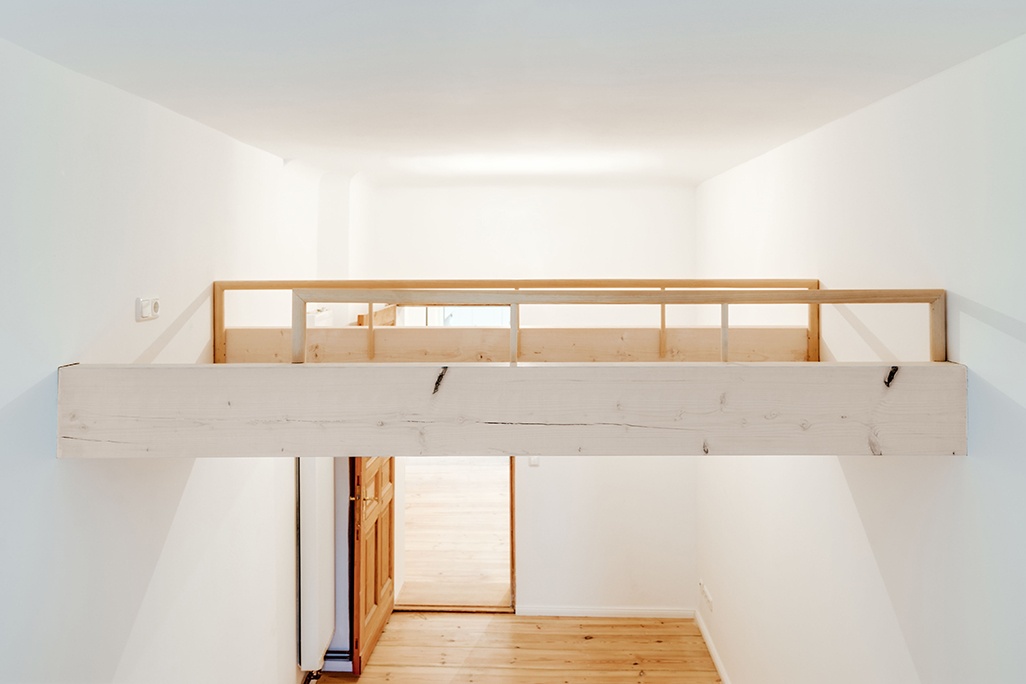 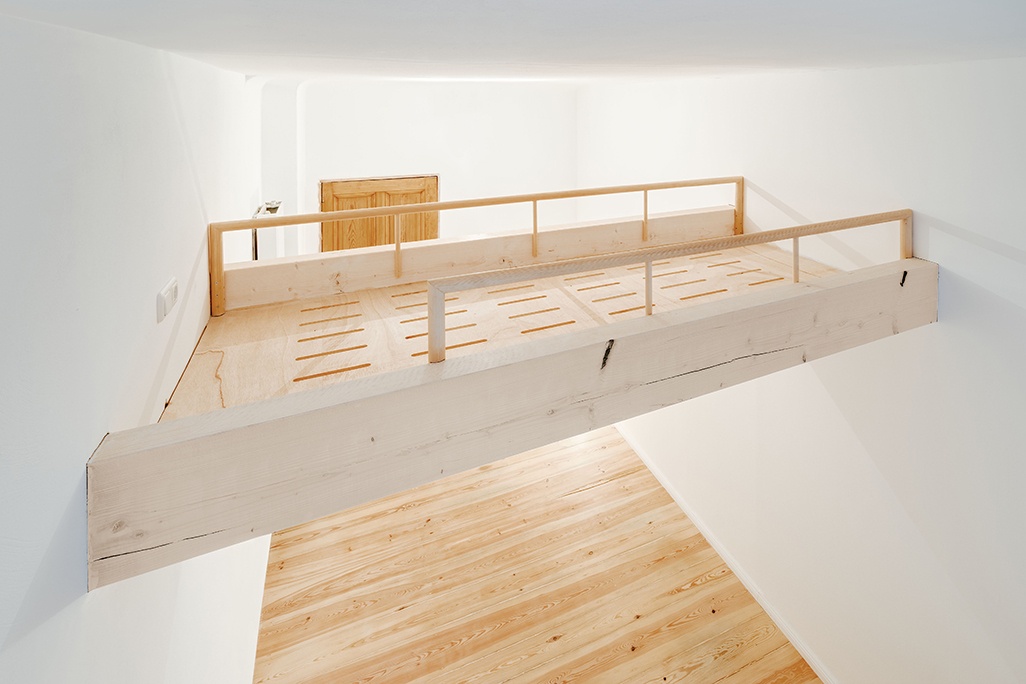 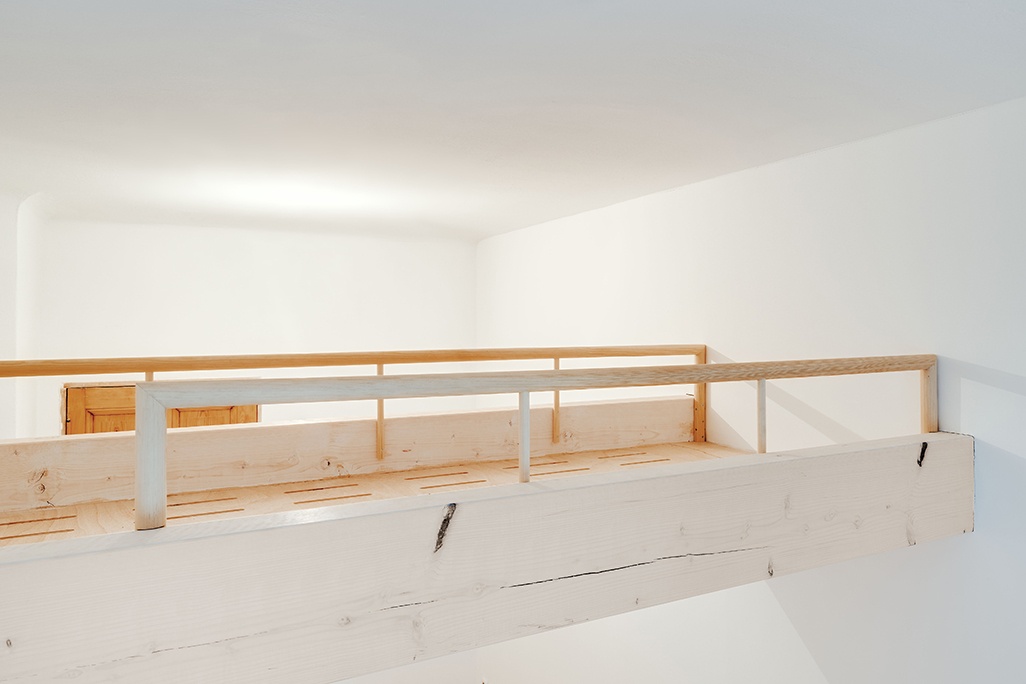 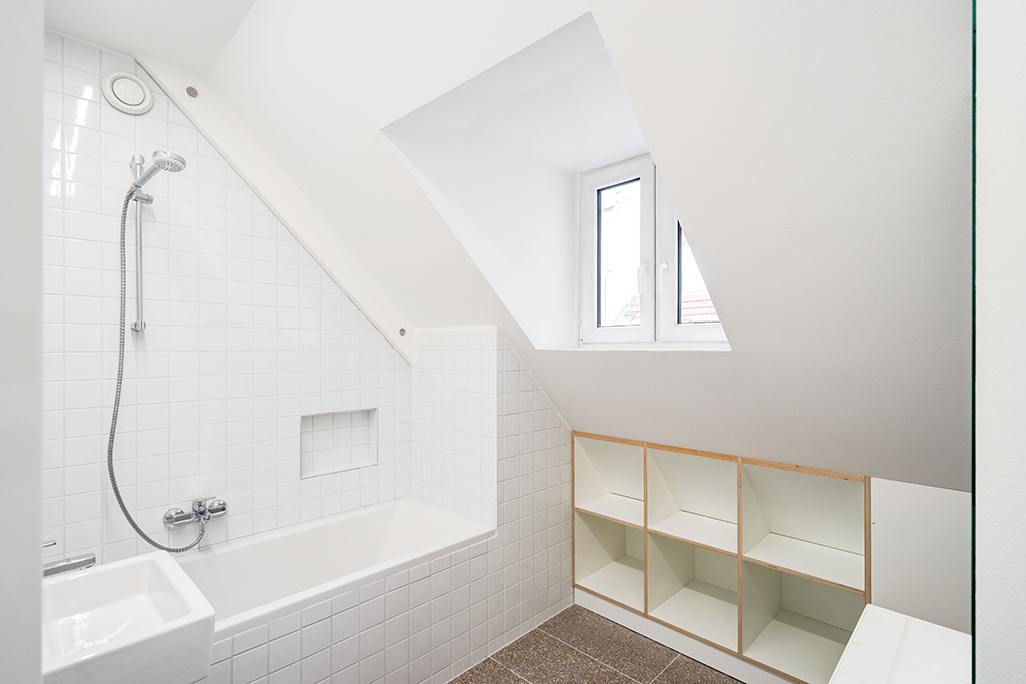 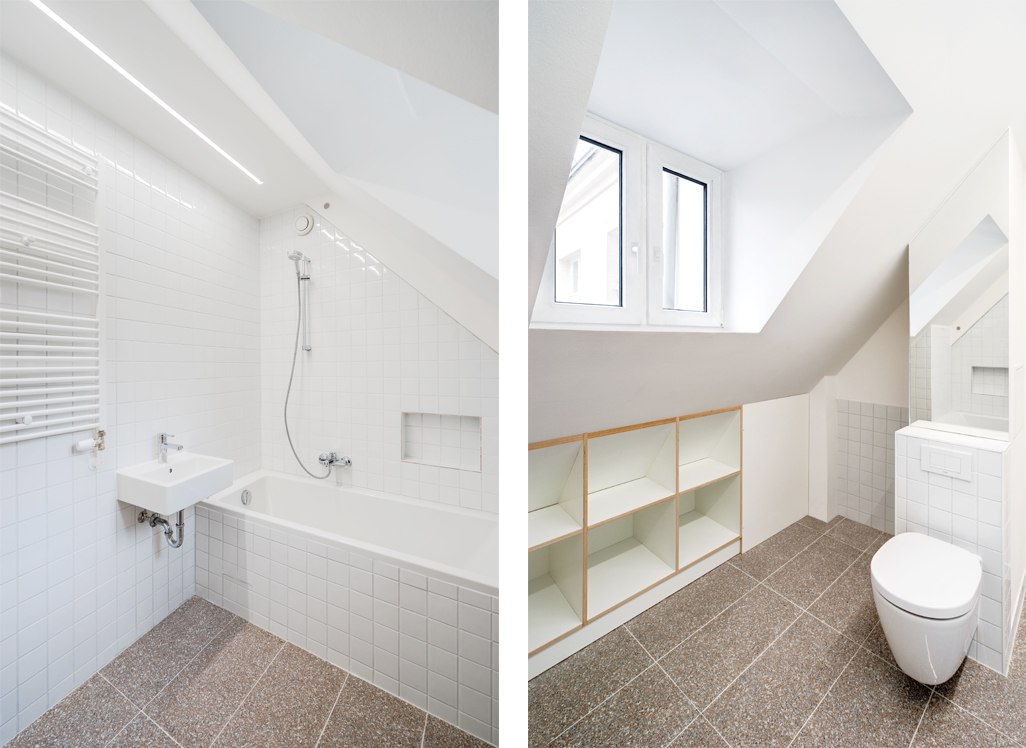 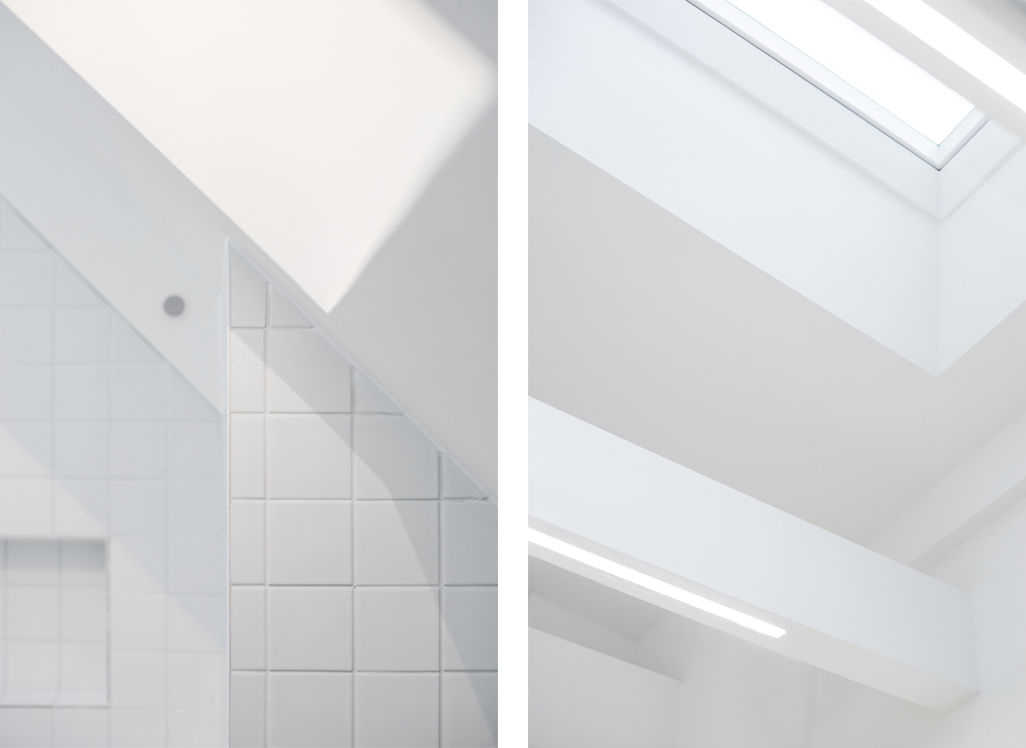 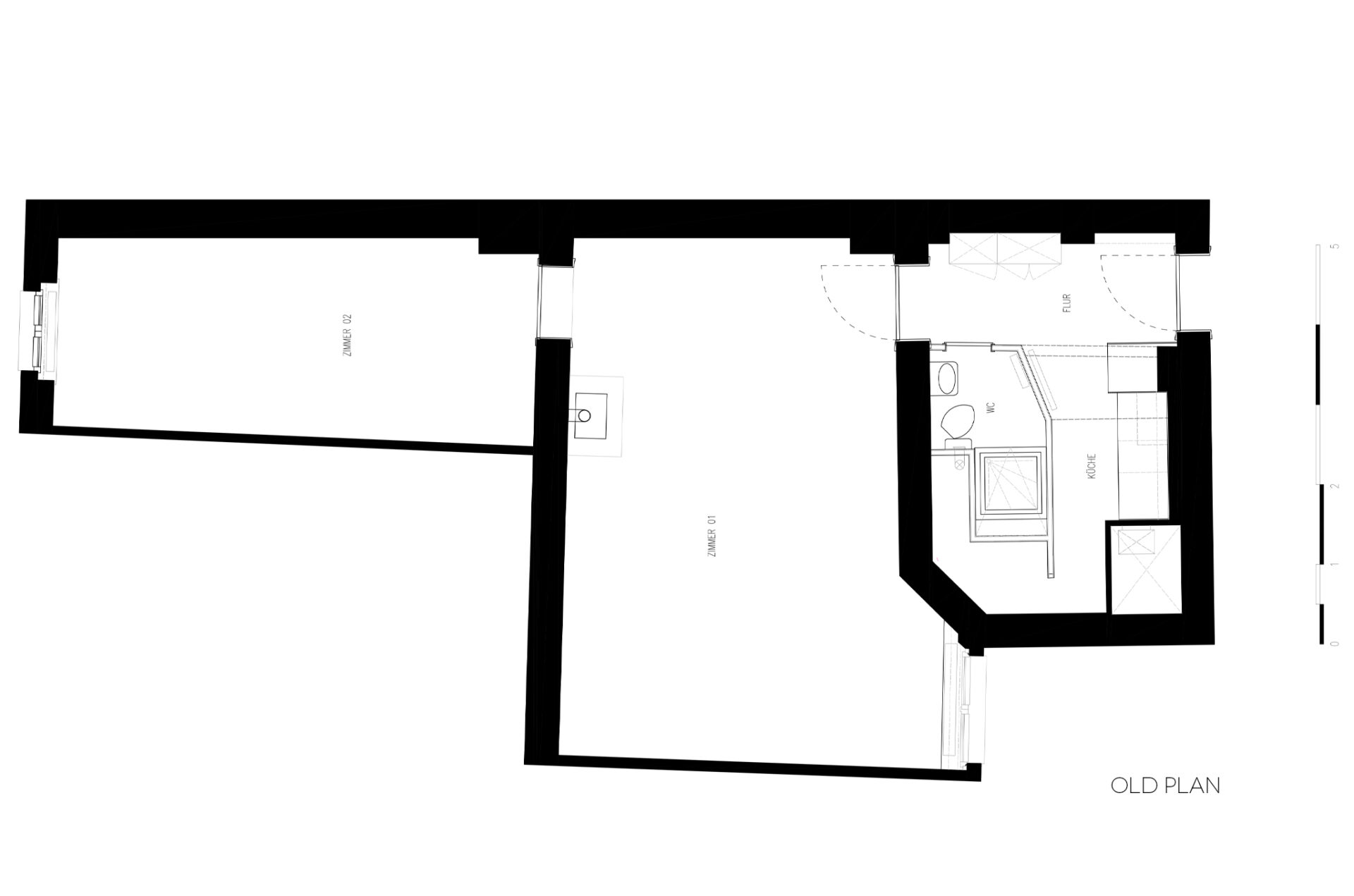 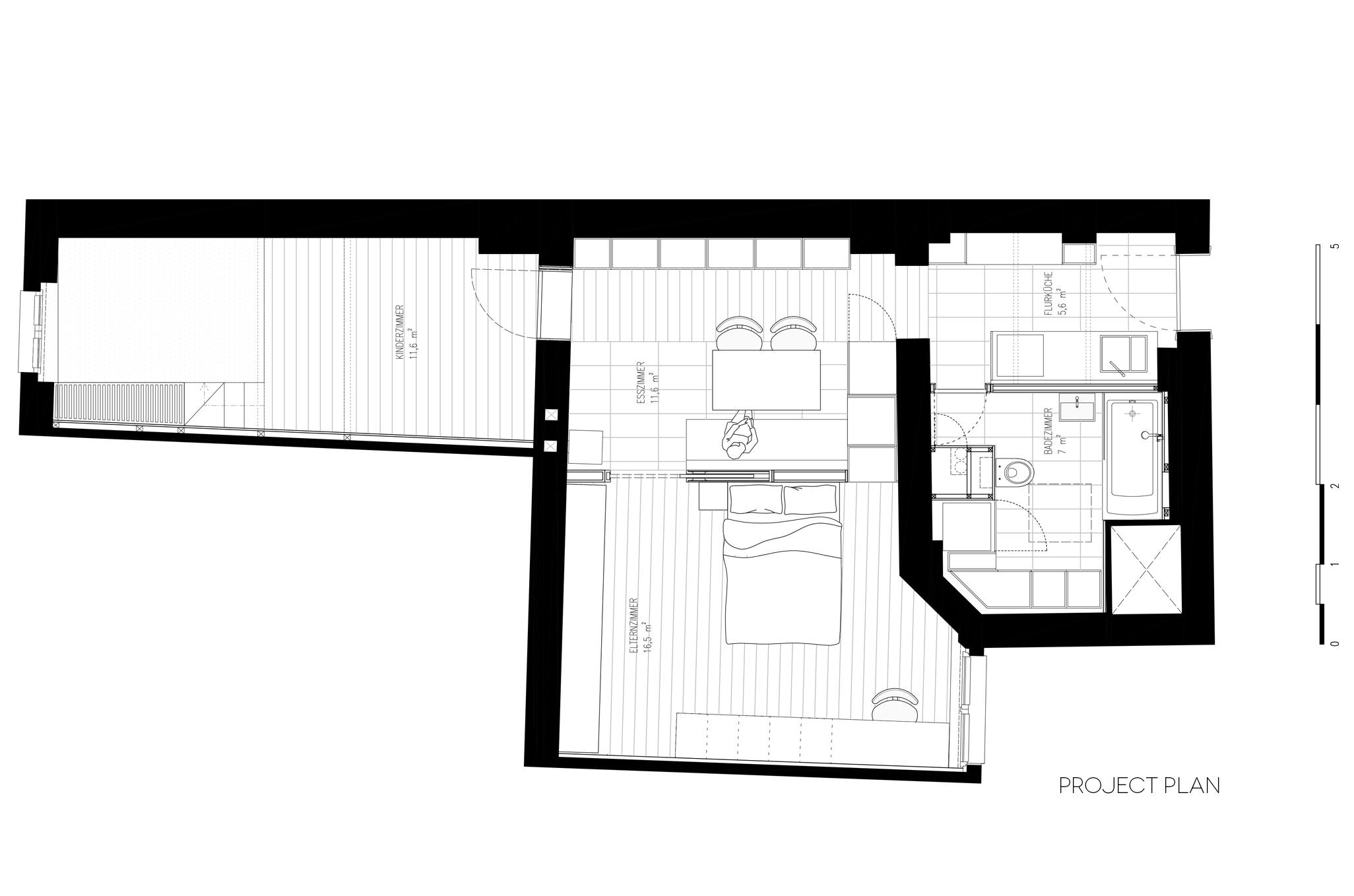